This year the International Society of Scratchboard Artists (ISSA) allowed non-members to enter their 3rd annual juried exhibition. The show is hanging in the Page-Walker Arts & History Center in Cary, North Carolina—less than 10 minutes from my house. It will be up until the middle of August.

A couple of ISSA members contacted me several months before the show and encouraged me to enter. Their warm invitation and my close proximity to the gallery helped overcome my tendency to procrastinate. I entered my artwork and looked forward to meeting the artists and attending the workshops associated with the opening of the show. Previous to the show, several artists posted their entries to the Wet Canvas site and I knew the caliber of the artists at the show was going to be high. I had no expectations of winning anything since my entries aren’t based on photographic reference and my level of detail was courser than what I saw in most of the previews.

Friday at 6pm was the reception for the artists. Cami (my wife) and I showed up and we were immediately impressed with the work we saw. The quality was even better up close and the show was bigger than I had expected. It took up the first and second floors.

Ginger Gehres, the ISSA exhibition director, greeted us and made us feel right at home. Cami and I walked around looking at all the art and talking about the art we liked best. I assured her I would not be receiving an award. There were too many great pieces for me to expect that.

There were plenty of other artists milling about and I tried to put faces to names. At 6:30 everyone was called together and the artists were invited to stand at one end of the room. Andrea Shouten, the ISSA president and Elaine Salazar from Ampersand gave out the awards. There was a master division and an open division. As I predicted, all of the awards were given out and my name was not mentioned. That was until they announced the Special Venkat Award of Excellence. I heard “Church on Agave Hill” and thought it sounded very familiar. Suddenly, I realized in disbelief that it was mine. The award was presented by Krish Krishnan, the son of Venkateswaran K. Krishnan, the donor. I was very surprised and grateful to receive it. I enjoyed creating the artwork and it made me feel good to know that someone else liked it too.

After the awards I got to meet some of the artists. Later I met the group of artists at a restaurant for dinner. It was nice to see their personalities and understand how much friendship they share. Saturday morning I attended a workshops where Rikki Fisher showed her process using a combination of airbrush and fiberglass brush. Elaine Salazar followed with a very informative history of the Ampersand company. She also answered questions about products. In the afternoon Sally Maxwell gave critiques for anyone who wanted to bring their artwork forward. I got to sit in on the ISSA general meeting and, later on, Cami and I met the group of artists again for dinner. We had a great time. There were more workshops today (Sunday), but other obligations kept me from attending. I was sorry to miss more of the fun.

I am very thankful for the kind invitations and all the encouragement I got to attend this year’s event. Next year’s show will be in Maryland and Cami and I are already talking about attending. I will need to join the ISSA in case they decide not to have the show open to non-members. It’s going to be great.

Be warned. If you click on the picture it’s a big file and may take a while.

Cristina Penescu’s work is about as good as it gets in the genre of realistic scratchboard. I can’t think of anyone who has a more consistent portfolio of excellent work.

What sets her work apart from most is her attention to composition and light. She isn’t just taking a photograph and doing her best to mimic it in scratchboard. It’s obvious she is carefully choosing the reference photograph and planning the way it will be presented in the composition, including the background. Her subjects look like they comfortably belong in the space she creates for them on the board. Her use of bright highlights and dark shadows leads the eye on a visual journey through the strongest points of interest. And, her use of airbrush gives her work a greater tonal range than is generally possible with scratching alone.

I also like the fact that she is not afraid to show her work at large sizes. It is easy to admire someone’s work when you can see it in such detail.

I had seen these videos before, and ran across them again as I was researching using an airbrush for scratchboard—something I haven’t yet tried but have a strong desire to try. I wanted to share them here with anyone else who might be interested. 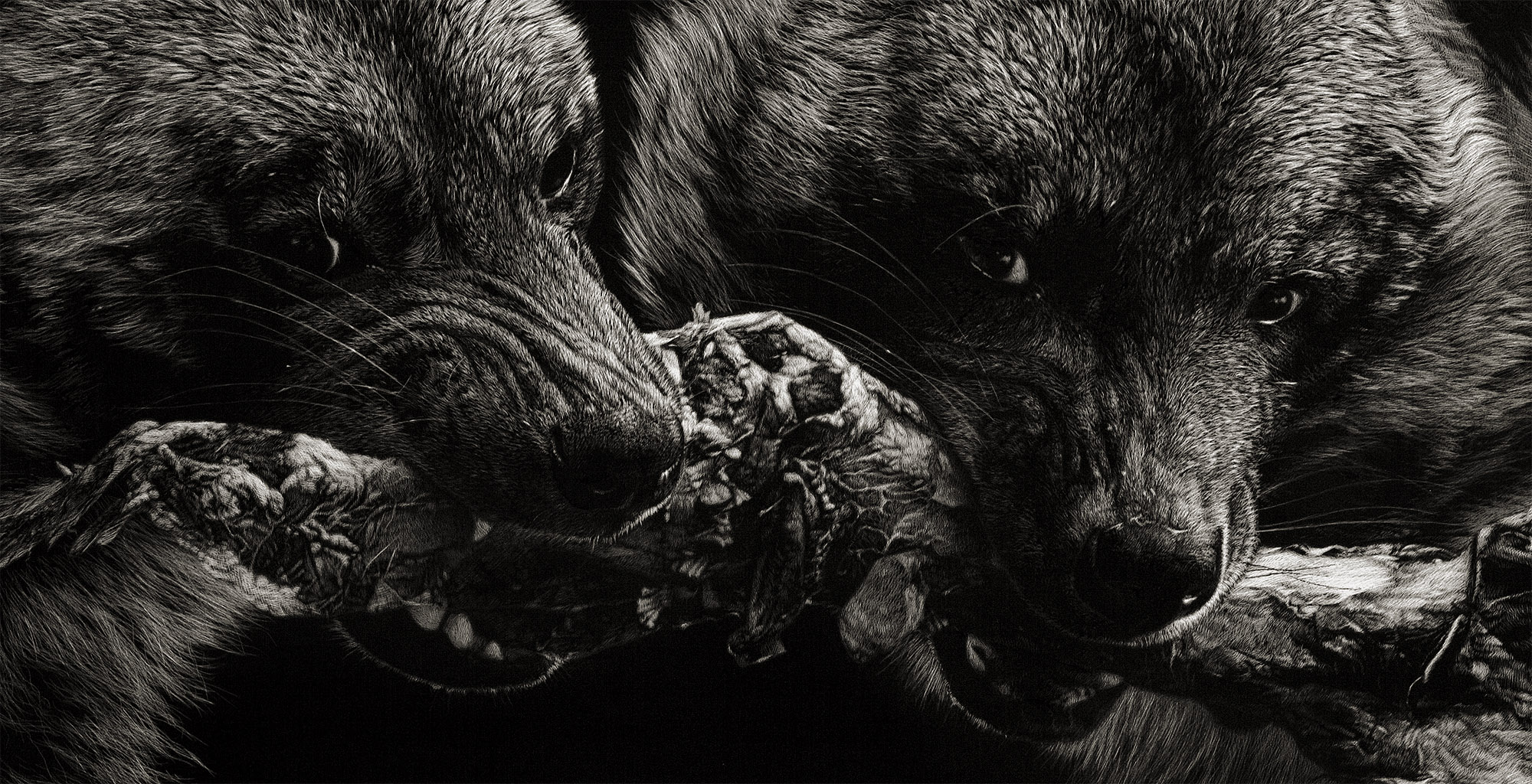 Looking through online artist portfolios, it’s common to see small images that don’t give the viewer a full appreciation of the work. In those situations I find myself wondering why the artist chose to present the work so small.

To illustrate what I’m talking about, the same image is shown at two sizes below. The small one is good enough for a thumbnail, but it doesn’t have enough detail to give more than a general impression of the work. At the small size you don’t see any of the scratch patterns in the background. The large size is much more interesting. Though not big enough to use for a high-resolution print, it shows enough detail to give the viewer a better appreciation of the original.

The International Society of Scratchboard Artists just happens to be having their 3rd Annual Juried Exhibition in the town where I live—Cary, North Carolina. The show starts Friday, June 27, and runs through the middle of August. It should be fun. I’m looking forward to meeting the other artists and admiring their work.

Two of my entries were accepted: